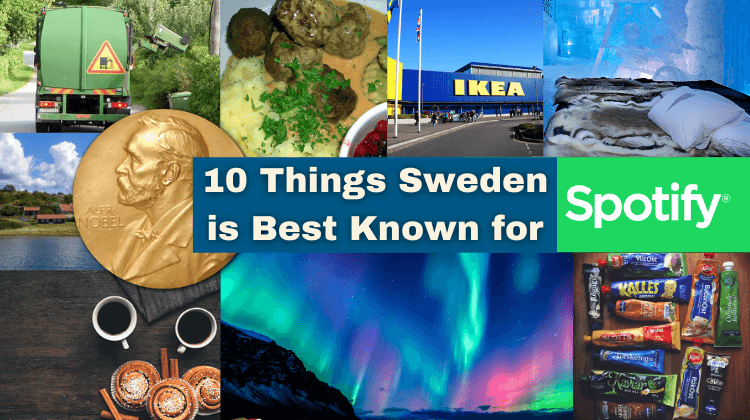 Sweden has a lot of interesting features that make it one of the best European countries to tour. You’ll come across lush landscapes, breathtaking architecture, unique food options, and more to keep you occupied while you tour the region. However, apart from the natural beauty and tourist sites, there are also some innovations and unique cultures that you will only find in Sweden. Have a look at our list of the best things about Sweden below to find out more about this exciting Nordic country.

If the name doesn’t ring a bell then you’re more likely to be familiar with the Nobel Prize. These are awards given to leading achievers within the literary and scientific worlds. The award’s name comes from the renowned Swedish businessman, engineer and chemist Alfred Nobel.

A French newspaper falsely printed his obituary instead of his brother’s, painting him as a dynamite inventor profiting from arms sales. As a result, he chose to leave behind a better legacy by starting the Nobel Prize award.

Sound bizarre? Well, don’t be surprised because Sweden has it. Originally made in 1989 in the village of Jukkasjärvi, the hotel is made purely of snow and ice from the Torne River.

Due to the nature of ice, the design of the hotel gets renewed every year by new designers looking to make a mark in the area. You’ll come across a bar, an ice chapel, and bedrooms as well. Depending on how long you’d like to stay, you can choose between the cold and hot rooms.

The cold rooms are made entirely of ice, with ice slabs that function as the beds. For comfort, try the hot rooms instead since the Jukkasjärvi region is known for having temperatures as low as -4°C to help maintain the structure.

Are you wondering why shoppers at IKEA crowd around the cafeteria every day? Then you probably haven’t had the pleasure of tasting the infamous Swedish meatballs. These are a delicacy usually made from beef and pork, but which can also be made from moose or elk meat. Take a meatball tour around Sweden and you’ll even find varieties made from reindeer, rooster, wild boar, salmon, or turkey.

Most countries these days are looking for ways to reduce the amount of waste within their borders. However, Sweden currently takes the prize among other European countries as far as sustainable recycling practices go.

The country has managed to reduce the amount of waste they process to a mere 1%. That’s thanks to the Pant system which has been around since 1984. Through the program, a variety of recycling bin options can be found all over the region to help with trash sorting.

Another show of the citizens’ dedication to greener practices is the fact that some individuals even visit recycling centers to sort the trash they’re disposing of.

5. The Most Islands In the World

Which country would you say has the most islands? Your answer would probably consider regions like the Philippines, Canada or even Indonesia.

Though that would make a good guess, most people don’t know that Sweden actually has the most islands in the world! Sweden boasts more than 267,000 islands spread out across the region. However, most of them are uninhabited which makes them easy to overlook by both locals and travelers alike.

You cannot talk about Sweden without mentioning their prowess in the design field. From the varied architecture you’ll come across in the cities, to the unique yet functional furniture options available at stores like the Swedish furniture giant IKEA, Swedes clearly have an eye for unique styles. Textiles also fall into this category, with the world’s second-largest clothing store H&M hailing from Sweden.

One of the most renowned music apps, globally, is Spotify. But did you know its origins are based in Sweden? Founded in Stockholm in 2006, the app was created to curtail piracy within the music industry. And going by the fact that it currently has more than 200 million users at the moment, it’s clearly made its mark in helping artists earn their dues from the songs they create.

Experience an authentic Swedish tradition by taking part in Fika. Loosely translated to mean a coffee break, Fika is any time during the day that Swedes take to blow off some steam if any.

To signify that it’s a Fika break, you’ll come across people at restaurants and cafes drinking coffee. Traditionally, though, it was a home affair where the coffee would be accompanied by some homemade pastries on the side. In general, Fika signifies the closeness that people feel whenever they take a break to socialise with friends and loved ones.

Also called the Aurora Borealis, Northern Lights are one of the best things about Sweden. create a light show you won’t find anywhere else. Get a clear view of the billowing lights by visiting the Abisko National Park.

It offers the best view since it’s one of the least polluted areas towards the far north side of the country. Several theories exist as to the existence of the Northern Lights. However, one thing is clear. You have to be in Sweden to glimpse the green, blue and pinkish hues that light up the night skies in Kiruna area.

A lot of different products come in tubes, such as toothpaste. However, in Sweden, you can find food in tubes. Though this isn’t something new since astronauts and deployed military personnel use them, Swedes consider food in tubes an everyday affair. As a result, you’ll come across several edible options available in tubes at the grocery stores.

These include spreadable cheese, pates, and caviar options for sandwiches. You’ll also find condiments like hamburger dressing or mayonnaise, and even purees which can be used for cooking, like tomato puree. Food tubes are so common in Sweden that there are even special devices you can use to ensure you squeeze all the contents out!